Home » Home » Who was King Athelstan? 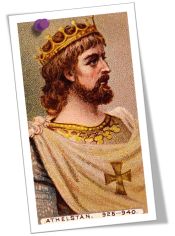 Who was King Athelstan?

You might wonder about the name of our school and who this King was. You will have heard of King Henry VIII and his 6 wives or Queen Elizabeth and her iron stomach but may not have heard of King Athelstan. He may not have been the most memorable King of England but he was (arguably) the first and was also recently voted Britain's best monarch!

Back in Athelstan's time (circa CE 900), England was split into 4 nations and it was Athelstan's grandad, Alfred the Great, who dreamed of a united England but he wouldn't achieve that dream himself. Instead he gave his cloak and sword to his grandson and it was Athelstan who would have the honour. In 924, was crowned King of all England.

You might wonder why our school is named after him and that answer lies in the names of the streets and the history of our town of Kingston. You may notice Athelstan Park which many of our children play in, Seven Kings Way or ancient looking names written on the sides of buildings outside Primark. This is because, like other ancient Kings of England, Athelstan had his Coronation here in Kingston. The Coronation Stone which still sits outside the Guild Hall (near Zizzi's) today, was where he was crowned the first King of England. A king straight from Arthurian legend.

As far as King's go, Athelstan was fair and just and made laws that helped the poor and mitigated the crimes of younger people. He greatly respected the rule of law and sought to unite a relatively multicultural and diverse Britain. It is these values that inspire us and why we are proud call ourselves King Athelstan.

Click here to find out more about King Athelstan.